Dust Helvetica by Daniel f. Bradley is a 25 page collection of letraset concrete poems produced in an edition of 45 chapbooks, simply stapled with a hand stamped cover and measuring 8.5″x11″.

While by the nature of the medium the application of letraset requires an intentionality of composition due to the fact that one must first decide where to place a given letter, and only after having chosen and aligned the letter on the page proceed to rub it on, despite this, there is a sense of urgency in the poems of Dust Helvetica which arises from the presence of the gestural. These are not contemplative, cerebral poems, but rather works that remain connected to the hand, the arm, the nervous system.

site specificity by Zane Koss is a single poem spanning 108 pages. Each page of the book contains one word (or permutation of letters). Bound with a self-adhesive fastener, site specificity measures 4.25″ x 5.5″ and has been produced in an edition of 20.

What is a site? Where is language located? Beginning with a specific site—the four letters of the word “site” on an otherwise blank page—this poem slowly transforms, shifting between the permutations suggested by the letters of the word “site” to track new possibilities through the visual and aural resemblances of the different configurations of letters and sound. With each new combination, site specificity explores the interconnectedness of language, inhabiting the spaces between words and forging new pathways as each letter blurs into the next, generating new sites for the appearance of language. As a material object, the book creates new mobile sites for exploring the presence of language as a material object in the world. Lay the pages on the ground and explore the new sites the book delineates, each page its own site and a node in the larger web of relations that constitute a given space—the page as a site nested within larger geospatial and social sites. How does a word shift in relation to a different location? How does the location shift in response to a different word? How does our language construct the world we live in

MODELS [of Economic Recovery] by Sacha Archer is an 7.5″x7.5″ loose leaf collection containing a suite of four rubber stamped concrete poems. It has been produced in an edition of 40 chapbooks.

The suite of concrete poems which makes up MODELS [of Economic Recovery] found its genesis in an article on CBC.ca that’s headline reads, V, W, U or L? Here’s what kind of shape Canada’s economy will be in coming out of COVID-19. The four letters, V, W, U and L were used by experts to show simplified models of possible economic outcomes. In MODELS, each concrete poem uses one of the 4 letters respectively, following the same line of thought, but with drastically different results. These are visceral and intuitive, sculptural questions of the uncertain future.

Last year Simulacrum Press published a wonderful series of minimalist letraset concrete poems by Kingston based poet Michael e. Casteels under the title & Jetsam. The title might have prompted readers to wonder where the initial word Flotsam had got to which makes up the phrase Flotsam & Jetsam. Was it simply that it sounded nice? Was that absence of Flotsam at all significant or was it just an off hand choice of Casteels’? To know Casteels’ work is to be quite certain that it was not without a reason. He is an always careful, intentional poet which is what gives so much power to his work, both minimal and otherwise—that concentration. Happily, a very concrete answer has risen out of Malmo, Sweden where Joakim Norling runs the visual poetry press Timglaset. The answer comes in the form of a publication by Casteels titled—you guessed it—flotsam.

You’ll notice in the above photo that both chapbooks are the same size. This is without a doubt an intentional move by Timglaset publisher and designer Joakim Norling linking the publications not only by name but also in the echo of dimensions.

flotsam can be purchased on the Timglaset website here.

& Jetsom can be purchased through Simulacrum Press here.

In July, 2019, Simulacrum Press was proud to publish knewro suite by Ottawa based poet nina jane drystek. knewro suite, as a print publication is comprised of three stark and striking concrete poems which serve as scores for sound poems. At the time of publication there was no extant recording of the sound poems–the scores could be viewed, the articulation of them imagined. Long awaited, drystek has released a recording of the suite (with an added sound poem, wennow) on bandcamp as performed by Conyer Clayton, jw curry, Chris Johnson and, of course, drystek herself.
The delay in the performance and recording of knewro suite was not due to a lack of effort—on the contrary—it was a dedication to a successful performance of the pieces which are, according to jw curry and Chris Johnson, remarkably difficult. Open your earmind and let your ear drum, because knewro suite does not disappoint.

Found Words From Olivetti by hiromi suzuki is an 8.5″x8.5″ 12 page chapbook which consists of 10 typewriter poems. It has been produced in an edition of 40 chapbooks.

The 10 typewriter poems which make up Found Words From Olivetti find hiromi suzuki extracting moods and situations from the typewriter with the same seeming naturalness and ease as we have seen in her collages and gifs. That the typed concrete poems have been photographed lends them an atmosphere evocative of film noir–and indeed, a cinematic narrative does seem to surface as the reader moves through the sequence of poems. 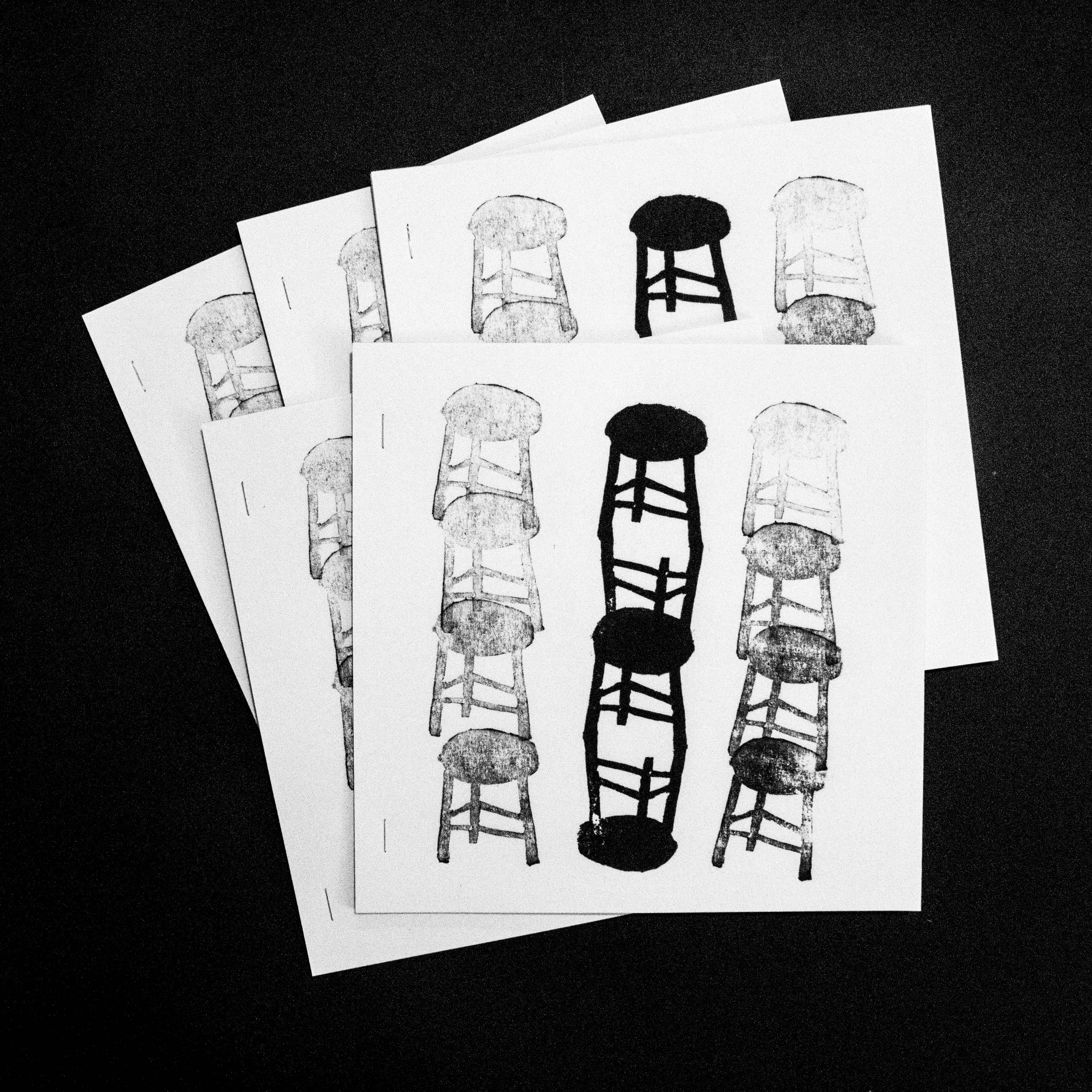 Kyle Flemmer’s sequence of Correctional Sonnets is a 15 page, 5″x5″ chapbook bound with fisheye grommets published in an edition of 40 copies.

It is said that mistakes are how we learn, though in the case of Kyle Flemmer’s Correctional Sonnets the mistake is discarded for the materials of correction which are re-purposed as writing tools. Using correctional fluid, pen, and tape on black card stock Flemmer has fashioned a suite of 15 poems that form a heroic crown in which the last line of each preceding poem is the first line of that which follows. The concluding poem, the mastersonnet, is composed of each first line of the preceding 14 sonnets.

Michael e. Casteels’ & Jetsam is a loose-leaf collection of letraset concrete poems printed on 4″x5.5″ pieces of 100lb cardstock. Published in an edition of 45 numbered copies.

& Jetsam is one half of a two-part visual poetry collection, with Flotsam (forthcoming from Timglaset) being the other half. Jetsam describes debris found in water deliberately thrown overboard by a crew in distress (often to lighten the load of a ship). The pieces for this collection were composed with a very limited set of Dry-Transfer sheets, which I purchased from Value Village. Presumably, they were donated by someone who was cleaning house, so in a way, the sheets themselves felt like Jetsam, floating through the thrift shop. The more I used each sheet, the fewer letters they contained, and the lighter they became. Now they are as transparent as the water on which a small vessel drifts slowly away, leaving these poems to be discovered by you.

The 3 scores which comprise knewro suite, bringing us back to the grid, are each striking works of a meticulously controlled concrete poetry where the merging and collision of letters exude their sonic potential. Their strength on the page is matched by the apparent difficulty of their actual performance to which various members of Quatuour Gualuour, the sound poetry group of which drystek is a member, have attested.

Reading from Underneath took place at The Printed Word in Dundas, Ontario on May 23rd, 2019. The reading was organized around a visit by Sam Roxas-Chua who had made his way up from Portland and stopped for a few days in Hamilton so that friends formerly acquainted only via social media could meet (and read) in the flesh.
The Readers that night were Franco Cortese (whose beautiful chapbook Teksker I’d just published and copies of which that night handed to him,) Jericha Shepai, Gavin Le Ber, myself, Sacha Archer, and of course, Sam Roxas-Chua.
It was a truly wonderful night of readings and as such I felt it would be good to make the recording available here. Thanks again to all the readers and to James McDonald for opening the space to us–and apologies to Franco as the recording was only started near the end of his reading.